Alexis Knapp – who is apparently an actress, and was in Couples Retreat, which I’ve seen, but I have no idea who she is – is running all around town telling anyone who will listen that the fetus in her uterus got half its DNA from Ryan Phillippe.

The couple dated briefly in 2010 after Phillippe split from actress Abbie Cornish in February. He is now reportedly dating actress Amanda Seyfried.

Knapp “has been telling people he is the father,” one source told Us Weekly, with another adding, “He and Alexis were actually together for a while … it was pretty serious.”

If Ryan Phillippe is in fact Alexis Knapp’s baby daddy, it will be his third child; the 32-year-old has a daughter and a son with ex-wife Reese Witherspoon. According to a source, the child is due to enter this world in June.

Knapp, who’ll be seen later this year in “So Undercover,” was spotted on a girls’ night in New Orleans in December, clubbing with costars Miley Cyrus and Kelly Osbourne.

…Reps for Phillippe and Knapp wouldn’t comment, but it’s believed that he will investigate paternity and, if found to be the baby daddy, take full responsibility for the bundle. 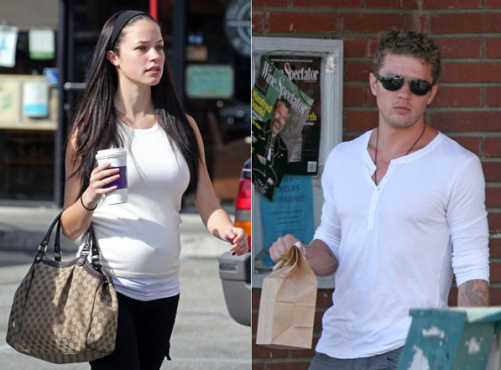