So the cover of this week’s People magazine is a picture of Caylee Anthony with the headlines “Caylee’s Family Secrets,” “Her Grandfather’s Bizarre Suicide Drama,” “Years of Family Feuds,” and “What the Police Know.”

Meanwhile, over in Jacksonville, Florida a guy named Jaime Salcedo created “The Inspirational Caylee Sunshine Doll”; it costs about $30 and $3 of each sale goes to causes for children. But his plans to sell the 18” doll came to a grinding halt this past Tuesday after a whole bunch of people complained. The t-shirts, bracelets, and stickers that say “Caylee Sunshine” are still available however, with 100% of the profits going to National Center for Missing and Exploited Children.

Salcedo, the owner of Showbiz Promotions, said the Caylee Anthony doll that sings “You Are My Sunshine,” (the same song that the 2-year old little girl was heard singing in a home video) was created as a tribute to Caylee.

Mere hours after it was announced that “The Inspirational Caylee Sunshine Doll” would go on sale at noon on Tuesday, people started coming out of the woodwork saying the doll was morbid and they’re outraged that someone would use the slaying of the little girl to make money.

Here’s my question: How is the doll any different from the People magazine cover? Aren’t they both exploiting Caylee Anthony’s death for money?

Jaime Salcedo defends the doll, saying that along with donating money to organizations for missing and exploited children, the doll will promote awareness.

“We want to give … we’re not trying to get rich. We’re putting ourselves at a whole lot of risk,” Salcedo said. “She’ll be a banner for missing and exploited children, and people will know and have a better idea how to handle those situations or stop those situations from happening.”

Side Note: Salcedo purposefully made the doll look nothing like Caylee Anthony so as not to offend the Anthony family.

Personally, I find nothing wrong with the doll. It’s not like it’s a picture of a dead Caylee Anthony – like the picture I have of Anna Nicole Smith in body bag.

How much you wanna bet that the folks who complained about “The Inspirational Caylee Sunshine Doll” are reading the latest People magazine right now? I believe that’s what we call “hypocritical.” 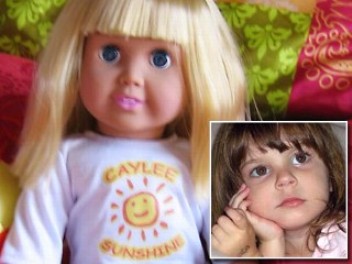