Back in December, I asked, Celebrity Morgue – Creepy or Cool?.

Whatever your answer, a bunch of you have visited the Celebrity Morgue and have gone back for more. As have I.

Most all death (but more so celebrity death) is fascinating to humans. It’s so hard to really grasp the concept because there’s no solid evidence of what actually happens to a person once they die. One minute you’re alive and your picture is on the cover of magazines, and the next you’re picture is on the celebrity morgue.

We are curious creatures. We are enthralled by murder. We rubber-neck past traffic accidents.

Below is a picture of Anna Nicole Smith in a body bag. I have no idea if it’s actually real, but I would in no way be surprised if it were. I am not responsible for its authenticity.

I debated for a while about whether or not to publish this picture. But it’s not gory or anything. It’s just unsettling. I mean no disrespect to Anna Nicole.

You have the choice now to not scroll down and look. Or you can choose to. It’s up to you. If you do look and get offended, please don’t blame me. I warned you. 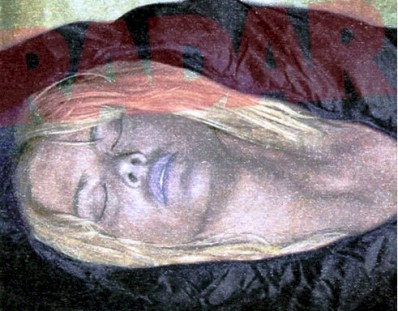