So the Super Bowl kickoff time is at 3:20pm tomorrow (or somewhere there abouts) over here in California, but NBC’s coverage begins at 9:00am Pacific time. That’s a whole lot of pre-game coverage. And you know there will be men across the West who can’t get up early for church or chores, but come Super Bowl Sunday they’re up and at ‘em before the sun.

If you’re not able to watch the Super Bowl on TV, don’t worry because it’s going to be on the radio too. Westwood One, the exclusive station of the NFL will be airing the game with broadcasters Marv Albert, Boomer Esiason, John Dockery, Mark Malone, Jim Gray, and Tommy Tighe. Visit Westwood One’s website to find your local station.

Here’s something fun to think about. While we’re all watching the Super Bowl coverage with our friends and family, our new President will be watching the game at the White House with his friends as well as a bipartisan group of lawmakers. And, he’ll be rooting for the Pittsburgh Steelers.

“I have to say, you know, I wish the Cardinals the best,” President Obama said. “You know, Kurt Warner is a great story, and he’s closer to my age than anybody else on the field.”

“Other than the Bears,” he continued, “the Steelers are probably the team that’s closest to my heart.” [Source] 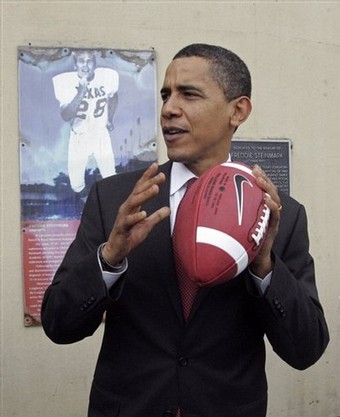