Panama leader General Manuel Antonio Noriega was indicted by a U.S. grand jury along with 16 of his associates on charges of drug smuggling and money laundering. General Noriega was also charged with smuggling marijuana into the U.S. and assisting a cocaine drug cartel.

Before Manuel Noriega became a drug lord he actually had a pretty bright military future, even securing a position with the CIA. [Source]

Manuel Antonio Noriega was born on February 11, 1934 in Panama. Although he was never officially president of Panama, he held the position of “chief executive officer” for a brief period of time. The 1989 U.S. invasion removed Noriega from power; he was captured, then detained as a prisoner of war and flown to the United States. In April 1992, Manuel Noriega was (finally) tried on eight counts of racketeering, money laundering, and drug trafficking.

In December 2004, he was briefly hospitalized after suffering a minor stroke.

The Federal Bureau of Prisons website as of February 2008, does not give a projected release date for inmate Noriega. However, he may be handed over to another country for trial or imprisonment instead of being released into the public realm.

Under Article 85 of the Third Geneva Convention, Noriega is still considered a prisoner of war, despite his conviction for acts committed prior to his capture by the “detaining power” (the United States). This status has meant that he has his own prison cell furnished with electronics, which some have described as the “Presidential suite.”

Noriega remains in prison as of January 2009. [Source] 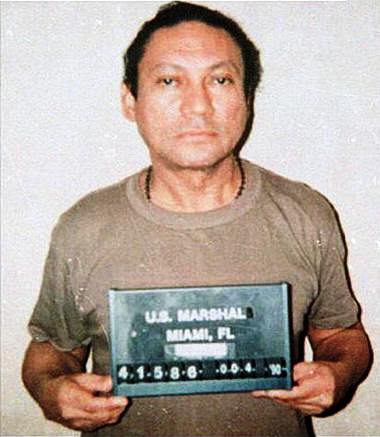