The Los Angeles Times is reporting that all-star college and pro quarterback Jack Kemp, who went on to serve nine House terms as secretary of Housing and Urban Development, as well as Robert Dole’s VP running mate in the 1996 presidential race, died Saturday evening of cancer at the age of 73.

Before the 1996 presidential race Jack Kemp ran his own unsuccessful presidential campaign in 1988, running against George H.W. Bush; who would later appoint Kemp as his HUD secretary.

Jack Kemp had allowed his office to announce his terminal illness in early January, but no details of treatment were given – only that he would continue his charitable activities.

The following statement was released by the Kemp family a short while ago:

Jack Kemp passed peacefully into the presence of the Lord shortly after 6 o’clock this evening, surrounded by the love of his family and pastor, and believing with Isaiah, “My strength and my courage is the Lord.”

During the treatment of his cancer, Jack expressed his gratitude for the thoughts and prayers of so many friends, a gratitude which the Kemp family shares.

Funeral details are expected to be released Sunday.

Since January Jack Kemp’s condition had been quickly declining, and his friends and family knew the clock was running out on the life of the devoted father and politician.

So devoted to his children was Jack Kemp, that he was known to break off Friday business meetings so he could fly overnight to watch his two sons, Jeff and Jimmy, play in their college or pro footballs games; the boys are quarterbacks just like their father was. 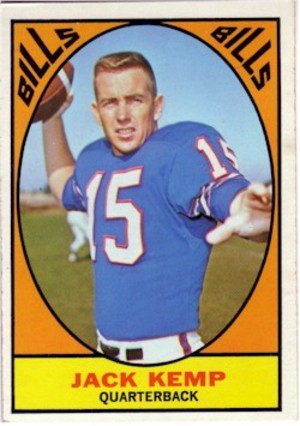