I’m just gonna put this out there and you can do with it what you want…..

I think Tiger Woods is a big dumb idiot who should be concentrating on fully redeeming himself as a husband and a man in general before he even thinks about returning to golf.

I would be so pissed if I was his wife. Actually, I would have thrown his nasty butt out on the street the instant the sh*t hit the fan, but that’s a different story. Elin is either really strong or really stupid. Just sayin’.

So trifilin’ Tiger is going to be making a statement to the press this Friday and is said to be addressing both his future in golf and the “transgressions” he admitted to committing late last year.

According to a statement from Woods’ agent, the golfer will speak to a small group of “friends, colleagues and close associates” at 11 a.m. Friday at the TPC Sawgrass clubhouse in Ponte Vedra Beach, Fla. Woods plans to apologize for his behavior last year, when several women reported having affairs with the renowned golfer.

Gasparino said he has been told by sources inside some of Woods’ corporate sponsors that the disgraced golfer was planning a return to the golf links and would offer a public apology.

It’s gonna take a helluv a lot more than some wimpy press conference apology to satisfy me, that’s for sure. This may be the Year of the Tiger, but come on; it’s only been like three months. Way too soon to return to work – and the public eye – if you ask me.

I know this will never happen, but I would love to see Tiger Woods get up there and admit that he’s a cheat and a scoundrel, that his wife beat his face with a golf club the night he crashed his car. Oh well, a girl can dream….. 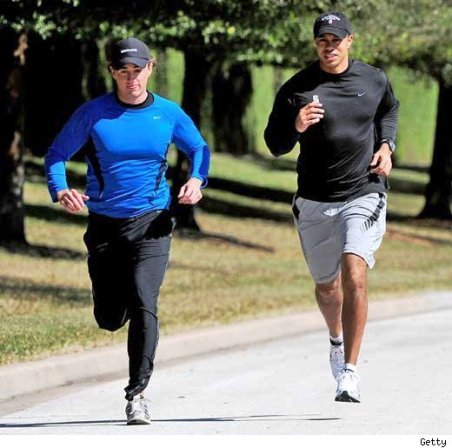 P.S. Who is that running with Tiger? Do they have boobs and a package?