So Tiger Woods gave his little “apology” last week, but that doesn’t mean people have stopped talking about him.

According to the National Enquirer, Tiger is in rehab for more than just his sex addiction; they say he’s also addicted to prescription pain killers. The magazine is claiming that while in sex rehab Tiger blamed his bad judgment on pills. Because, you know, he couldn’t possibly have made the decision to be a cheating a-hole sober.

The National Enquirer, remember, was the first to break the story of Tiger’s wandering eye – so this could very well be true. But then again, it could totally be made up.

In other Tiger Woods news, PETA has agreed to temporarily suspend a series of ads featuring the former golf great (I say former because, let’s face it, it’s gonna be hard for Tiger to come back after this debacle).

Apparently Tiger’s people took offense to the PETA ads which openly mocked Woods for his serial affairs, while urging pet owners to spay and neuter their pets.

Too much sex can be a bad thing … for little tigers too. Help keep your cats (and dogs) out of trouble: Always spay or neuter!

Despite being chided by The White House after using First Lady Michelle Obama’s likeness without permission in a 2009 advertisement, PETA says they didn’t ask for Tiger’s approval on the billboard. PETA bosses say the irony of using Tiger in an animal birth control ad was “too good to pass up.” [source] 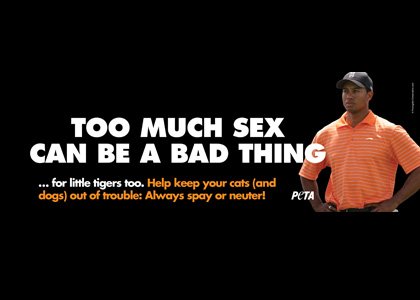 A rep for PETA told TMZ in a statement: “In light of conversations we have had with Mr. Woods’ attorneys, plans to run our billboard are on hold at this time.”

A representative for Gatorade told CNBC, “I can confirm that we no longer see a role for Tiger in our marketing efforts and have ended our relationship. However, our partnership with the Tiger Woods Foundation will continue. We wish Tiger all the best.”

In other words Tiger, don’t let the door knob hit ya where the good lord split ya. 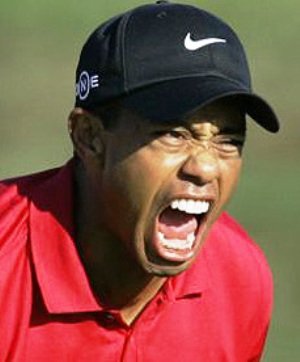