About 35 miles northeast of Little Rock, Arkansas, at about 10:00 p.m. last Friday night, thousands of red-winged blackbirds began falling from the sky. They covered the earth, landing in backyards and on roofs, blanketing the roads.

“One of them almost hit my best friend in the head,” said Christy Stephens, who was standing outside among the smoking crowd at a New Year’s Eve party. “We went inside after that.”

I would hope so! How freaky is that? Outside minding your own business on New Year’s Eve and it friggin’ starts raining blackbirds? No thank you!

The cause is still being determined, said Keith Stephens, a spokesman for the Arkansas Game and Fish Commission. Of the more than 4,000 birds that fell on Beebe, 65 samples have been sent to labs, one in Arkansas, the other in Wisconsin. Some results may be available as soon as Monday, Mr. Stephens said.

For now, state officials are speculating that the birds may have died as a result of stress, startled by fireworks in the area, or perhaps by lightning. But, Mr. Stephens acknowledged that the cause may never be known.

A few days earlier, by the way, 83,000 fish died in the western part of Arkansas. Officials are saying the two incidents are not related, and believe the fish died of disease.

But it is all rather odd.

Becky Short, who also sits on the City Council, said that in addition to the controversial fireworks theory, people have already begun joking about the biblical end times and U.F.O.’s.

Her conclusion was simpler.

“Looks like some sort of phenomenon happened,” she said.

So let me get this straight – thousands of fish die, a bunch of earthquakes hit, and now 4,000 birds fall from the sky, and they think it’s just a crazy phenomenon? Sounds like the end of the world to me. Or at least the end of Arkansas. 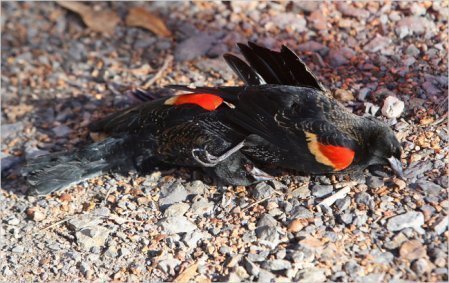 “Hell, maybe we’re all getting a little carried away with this. Admittedly a few birds did act strange, but that’s no reason to…”

“I keep telling you, this isn’t ‘a few birds’! These are gulls, crows, swifts…!”