Betty White is totally on Team Sandra. Along with a billion other people.

Betty White has been in the business a very long time and is certainly no stranger to marriage troubles and rumors of celebrity infidelity.

And apparently she’s not very forgiving of it.

According to reports, Betty White told her friends that she’s so upset about what’s going on and for Sandra Bullock’s painful humiliation, the former “Golden Girl” can’t even talk about Jesse James without using language that … well … you wouldn’t expect an old lady to use. 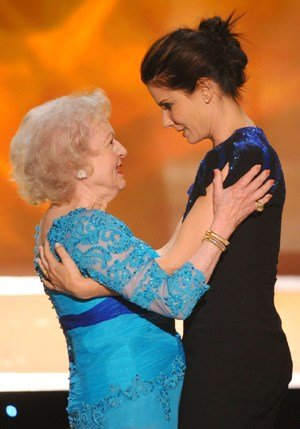 On June 14, 1963, White married television host and personality Allen Ludden, whom she had met on Password. He proposed to White at least twice before she accepted. The couple appeared together in an episode of The Odd Couple featuring Felix’s and Oscar’s appearance on Password. Ludden also appeared as a guest panelist on Match Game, with White sitting in the audience (she was prompted to rip apart one of Ludden’s wrong answers on camera during an episode of Match Game ’74); the two appeared together on the panel in 1975.

Ludden died from stomach cancer on June 9, 1981, in Los Angeles. They had no children together. White has not remarried since Ludden’s death.