I just might be able to rest easy tonight.

Donald Trump has finally come clean about how he keeps the disaster on the top of his head looking perfectly hideous day in and day out.

I know you’re as curious as I am. Don’t lie. Personally, I’m far more disturbed by Donald Trump’s hair than I am by Obama’s birth controversy.

Perhaps Trump is trying to appeal to the masses in his still unofficial bid for the White House by addressing an issue that has plagued him for years and admitting to Rolling Stone magazine his obnoxious coif has issues.

More than likely, however, he’s probably just doing more of whatever he can to talk about himself as much as possible.

“OK, what I do is, wash it with Head and Shoulders. I don’t dry it, though. I let it dry by itself,” Trump said. “It takes about an hour. Then I read papers and things… I also watch TV. I love Fox, I like Morning Joe, I like that the Today show did a beautiful piece on me yesterday — I mean, relatively speaking.”

“OK, so I’ve done all that. I then comb my hair. Yes, I do use a comb,” he confirms. “Do I comb it forward? No, I don’t comb it forward. I actually don’t have a bad hairline. When you think about it, it’s not bad. I mean, I get a lot of credit for comb-overs. But it’s not really a comb-over. It’s sort of a little bit forward and back. I’ve combed it the same way for years. Same thing, every time.”

While I’m glad The Donald has finally shared with us his hair grooming secrets, I don’t think I totally believe him. I mean, he’s got to be leaving something out. Like the details of this supposed “bad hairline” he claims not to have – and what exactly he means by combing his tresses “a little bit forward and back” 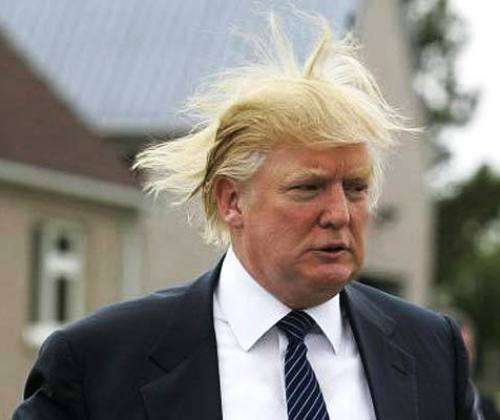