You know you’re really sick when you’re too sick to go to court and fight your greedy estranged wife who’s trying to take all your hard-earned money.

Dennis Hopper’s prostate cancer is so bad the actor is not only too ill battle his wife Victoria in divorce court, he’s too frail for chemotherapy treatments.

It’s rumored that Dennis Hopper weighs barely more than 100 pounds, and that he had high hopes chemo would get him healthy enough to work again – or at least make it to court. His doctors don’t seem as optimistic, saying Hopper won’t be able to “ever recover sufficiently to be subject to a deposition.”

The main issue being fought over is the amount of money Victoria is asking for as spousal support. Court documents say Dennis Hopper can only afford $5,000 a month since he’s not working. According to Hopper’s accountant, the star’s liquid assets total a mere $300,000.

Of course none of that sits well with Victoria, who somehow got it in her head that Dennis Hopper has made millions of dollars selling his artwork. Dennis contends he’s only made about $45,000 in art sales over the last nine years.

It’s sad enough watching Dennis Hopper die, but knowing his wife is trying to take him for all he’s worth before he kicks the bucket is just down heartbreaking. 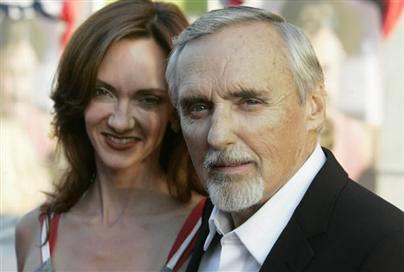