Fallen Country music star Mindy McCready, 33, tried to commit suicide this morning. Again. Her roommate’s mother called paramedics after she received a phone call from McCready that raised some concern.

According to a Nashville, TN police spokesperson, authorities “responded to a 10-63, that’s a suicide call. Mindy McCready was at the house…We responded with paramedics, who took her to a local hospital.” Mindy McCready reportedly had cut her wrists.

The long suffering singer has attempted suicide before. In 2005 she took a bunch of pills and drank a bunch of booze – and left behind a 4-page suicide note.

Last Summer Mindy McCready suffered a breakdown after her 1991 affair with baseball’s Roger Clemens was discovered (McCready was 16 at the time of the affair and Clemens was 29).

Jodie Sweetin, also a troubled celebrity, grabbed her kid and left her husband a short while back, and now a Judge in Orange County has decided during an emergency custody hearing today that she can’t be with the baby without supervision.

There are also suspicions that the former Full House star and meth addict has fallen off the wagon and gone back to her drinking and drugging ways. Her estranged husband, Cody Herpin thinks so too and even told authorities that Sweetin had driven while intoxicated with their 8-month-old baby in the car.

Both Jodie Sweetin and Cody Herpin will have to take a drug test before the next hearing. 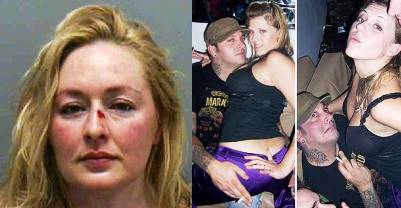