It was ruled on Tuesday that Britney Spears’ father Jamie Spears will remain as the pop star’s conservator permanently and was named as permanent co-conservator of her estate, along side attorney Andrew Wallet.

Britney’s court-appointed lawyer Samuel Ingham told the court, “I’ve met several times with [Britney] and she requested that I not object to the permanent conservatorship.

Los Angeles Superior Court Commissioner Reva Goetz, who has been presiding over the case said, “The court finds the proposed permanent conservatorship is necessary and appropriate [because of the] complexities of her financial and business entities and also potential for her being susceptible to influences.”

Permanent, mind you, does not necessarily mean forever.

“People shouldn’t read too much into the word ‘permanent’” explains Terry K. Wasserman, a mental health lawyer not involved with this case. “In many cases, it’s just a formality to avoid having to renew a temporary status over and over again.”

A source close to Spears concurs, saying, “This is by no means something that’s going to last forever. The conservatorship being made permanent in name is primarily to ensure increased time with her children, and provide support for her music and work goals.”

Adds Wasserman: “Ms. Spears can regain control of her life anytime – as long as her doctors feel she’s able to manage her own affairs.”

In the meantime, however, being under the charge of a conservator makes it very unlikely Britney will regain custody of her children as quickly as she may like.

“It certainly makes it more difficult to gain custody of the children because if one court found that she is not capable of taking care of herself and affairs than how is the other court going to find her able to take care of the affairs of two babies,” certified family law specialist Alexandra Leichter tells E! News … The conservatorship seems to have been made permanent because “the condition that apparently caused temporary conservatorship did not change,” she said.

I think we can all agree that Jamie Spears has done an excellent job of reigning in Britney, and that she’s on the right road to recovery. A permanent conservatorship may seem a bit extreme, but speaking as someone with mental illness in the family, I think this is a good decision and in the long run will benefit Britney Spears more than it will harm her. 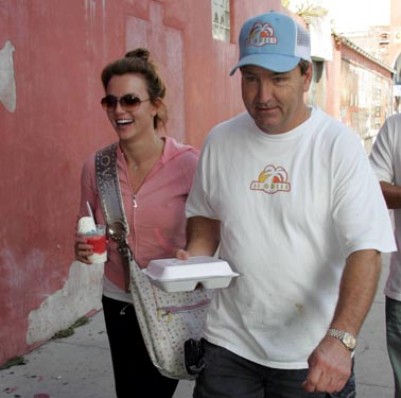