What a joke. Will someone please save Heidi Montag from her delusions before she goes off the deep end? Or before I track her down and pummel her? Put us out of our misery quick!

Man, you give a 23-year-old girl 10 surgeries in one day and a measly little film role, and her head swells to the size of her new boobs.

It was reported on Tuesday that Megan Fox “reluctantly turned down” the opportunity to replace Angelina Jolie in the next Lara Croft film. Rumor has it Megan turned the role down because she didn’t want to be type-casted into Angelina Jolie-esque parts; but I’m sure if you ask a rep, Megan had a “scheduling conflict.”

Anyway, Heidi Montag has decided she would be the most appropriate replacement for Angelina Jolie in the Tomb Raider series. Seriously.

“I want to be the blonde tomb raider,” she Tweeted, “i’m better with guns then both Angelina and Megan Fox put together!”

Oh lord – what a horrible, horrible movie that would be.

Montag recently filmed a cameo in her first feature film, Just Go With It, starring Adam Sandler and Jennifer Aniston. In the movie, Montag spoofs her 10 plastic surgery operations. Kevin Nealon “has had more surgery than I have … so we kept playing around with who has more injections,” she recently explained to Jay Leno of her role.

UsMagazine.com recently reported that Montag acted like a diva while recently taping the last season of The Hills (which airs Apr. 27). She showed up with four bodyguard and refused to participate in a group photo shoot. Asked why, a source tells Us Montag replied: “I’m a movie star now!” 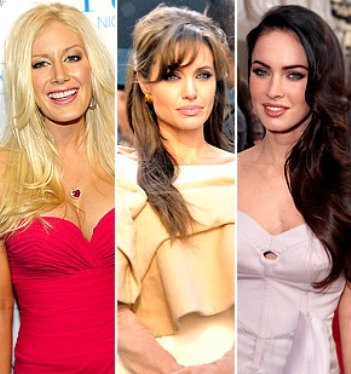