After I read the following quotes, the image of a sad and lonely little girl who just wants to be loved, immediately popped into my head.

Paris Hilton and her boyfriend of the moment Doug Reinhardt were at the I Heart Ronson for JCPenney party last night and apparently couldn’t stop gushing about each other.

“We’re best friends,” Paris [said]. “It’s not like we just met. We’ve known each other over the past year. I was in a relationship before and we reconnected. I’m really in love and really happy.”

As for the rumors that the two are engaged, it hasn’t happened yet, but it seems to be in the future for the two. “You never know,” Doug said. “He’s going to be my husband,” Paris giggled.

Oooh, a whole year! That’s like an eternity. Lindsay Lohan, in case you haven’t heard, was not only denied entry to the Ronson party, but was physically removed from the area by five large men.

Paris Hilton reminds me of Jessica Simpson and her obvious need for attention (and a marriage proposal) from her boyfriend Tony Romo. Am I the only one?

And I really don’t think the pictures of Paris Hilton in that ridiculous black bikini crap thing helped her case, either. Scroll down to check out her hideous get-up.

I look at the pictures and all I see is a girl on a balcony who wants everyone to look at her, and tell her she’s special, and how much they love her.

I don’t know, I might be the only one, but it’s beginning to look like Paris Hilton’s disturbing need to be in the spotlight is a direct result of being an insecure and scared little girl.

Paris Hilton is currently filming the second season of her reality show, My New BFF. Doesn’t that make you wonder what happened to the winner of season one, Brittany Flickinger?

Reading between the lines I’m guessing Brittany was in it for more than just being best friends – you know, because Paris is Paris so fame must follow.

“It’s really hard because I loved her and I trusted her, but sometimes people get too caught up and they change. I want a best friend who wants to be friends with me because I’m a good person and a good friend, not for any other reason. I’ve been fooled by so many girls. It’s good having my boyfriend on set and watching. He comes up with funny ideas and production loves him.”

It’s actually kind of sad. Paris is human and doesn’t deserve to be hurt like that by those she believes to have her best interest in mind.

However, about 99.7% of us saw it coming, so I’m sure we’re not all that surprised to hear about the departure of Brittany Flickinger from Paris Hilton’s inner circle.

Perhaps Paris can take all the time she is spending on her reality show and use it to become best friends with herself. Sounds lame, but it’s true. 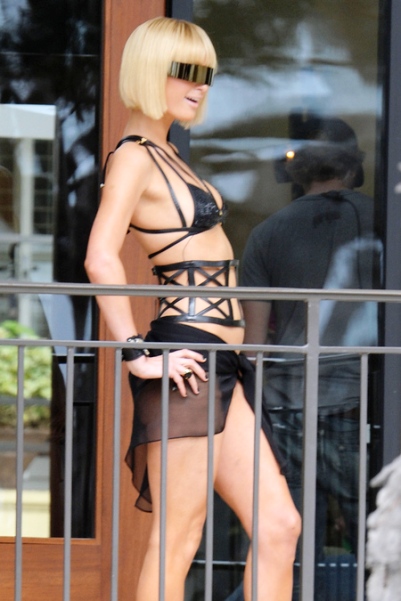 Is it just me, or can you not help but say “Hey-eyy” when you look at that picture?

The rest of the pictures can be found on Celebrity Rumors.