Gee, do you think getting a 29-year-old chick pregnant had something to do with Kelsey Grammer’s wife Camille filing for divorce?

Last month we found out that Kelsey Grammer’s wife of 13 years, Camille Donatacci, had filed for divorce. A few days ago pictures hit the internet of Grammer with his new girlfriend, Kayte Walsh.

Turns out, that new girlfriend is preggers and the 55-year-old Grammer is the father.

It will be the fifth child for Kelsey Grammer – he has two with Camille, an 8-year-old daughter named Mason and a 5-year-old boy named Jude, as well as two older daughters from previous relationships named Spencer and Greer.

The beans of Walsh’s pregnancy, by the way, were spilled by her father to the Daily Mail; the news was confirmed by Grammer’s rep on Thursday.

“It’s great news and we are very pleased for them both,” Walsh’s father, Alan, told the U.K. paper, adding that he has not met the actor yet and found out about the pregnancy “a couple days ago.”

Between you and me, I didn’t see this one coming. Then again, I thought Kelsey Grammer and Camille divorced years ago, so what do I know. 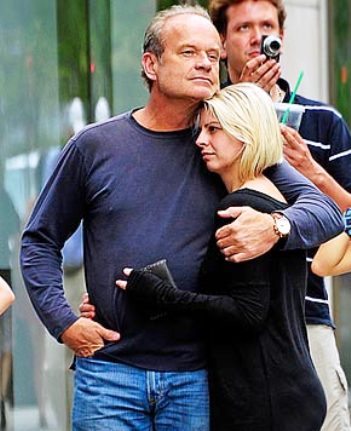