What do the 1953 death of Dylan Thomas and the 1978 suspected murder of Nancy Spungen have in common?

They both took place at New York City’s Hotel Chelsea – which is now for sale.

The bohemian landmark, built in 1883, has offered short and long term housing to generations of artists and musicians. With wrought-iron balconies and a 12-story staircase, the building was the city’s first cooperative apartment complex when it was built; it has been a hotel since 1905 and is on the National Register of Historic Places.

“It’s a wonderful community,” said Brian Bothwell, a film editor who has lived at the Chelsea for 16 years.

Bothwell said his second-floor apartment was home to musician Leonard Cohen in the 1960s and singer-actress Grace Jones in the 1980s.

But the hotel’s legacy as an artists’ playground could be threatened now that the group of families that has owned it for over 60 years have decided to sell the property.

“The hotel will always continue to be a destination for creativity and art, that’s what makes it so special,” shareholder Paul Brounstein said in a statement. “Nothing can ever change that.” 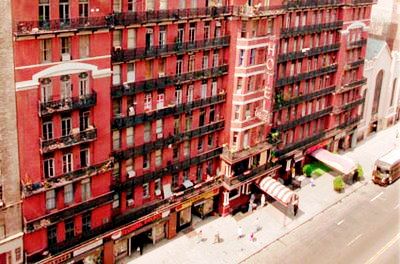