“Tom’s insight, talent, strength of character and comic timing made him a vital central figure in the ‘Happy Days’ experience. A great father and husband, and a wonderful artist, Tom led by example, and made us all laugh while he was doing it…

“My last conversations with Tom reflected the love of life and peace of mind that he always maintained throughout his full and rewarding life. I miss him already.”

Tom Bosley, who to many will always be Mr. Cunningham, died of heart failure today at a hospital near his home in Palm Springs. He was 83. The actor’s agent, Sheryl Abrams, said he was also battling lung cancer.

Already an accomplished Broadway actor when Happy Days premiered in 1974, Tom Bosley initially turned down the role at Howard Cunningham.

“After rereading the pilot script,” he recalled in a 1986 interview, “I changed my mind because of a scene between Howard Cunningham and Richie. The father/son situation was written so movingly, I fell in love with the project.”

And thank goodness he did because Happy Days wouldn’t have been nearly as happy without him.

“He was my husband for 11 years and the father of the company in many ways,” said Marion Ross, who played Marion Cunningham on the show. “He was so smart he could fix the end of a joke or a scene on the spot. We made a perfect couple. I played picolo to his tuba.” 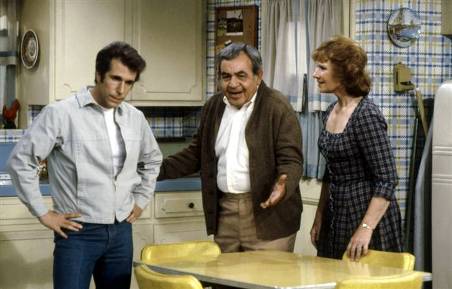 After Happy Days ended, Tom Bosley went on to star alongside Angela Lansbury as Sheriff Amos Tupper, in Murder She Wrote (one of my all-time favorite shows, by the by). Then from 1989 to 1991 he played Father Dowling, the crime-solving priest, in The Father Dowling Mysteries.

Clearly not ready to retire, Bosley toured with Broadway’s “Beauty and the Beast” as Bell’s father and “Show Boat” as Captain Andy in the 1990s.

Tom Bosley was married twice; first to dancer Jean Eliot in 1962 with whom he had a daughter Amy, and then actress-producer Patricia Carr in 1980.

More on Tom Bosley and his career at MSNBC.com Today Entertainment

As if you needed any more proof that Tom Bosley was awesome…..