Apparently Camille Grammer didn’t get my memo that she needs to shut her trap and go crawl under a rock somewhere.

We all know Camille is bitter about the demise of her marriage to Kelsey Grammer; it’s understandable she’d be pissed about being dumped for a younger woman. But if Camille Grammer doesn’t want people to think she’s a bitch, perhaps she needs to stop talking sh*t about her soon to be ex-husband. Just a thought.

When Kelsey Grammer’s fiancée had a miscarriage back in October, Camille made no attempt to hide her pleasure in the Kayte Walsh’s suffering.

Now she’s throwing daggers again, this time at Kelsey Grammer. Camille didn’t say it outright, but it’s pretty obvious what she was implying when she visited the Howard Stern Show ….. Kelsey Grammer is a cross-dresser.

Having told Stern that Kelsey was excited to get a role in cross-dressing Broadway show La Cage aux Folles, Howard asked (via RadarOnline), “But you’re saying you do think he’s gay, that when he got into La Cage aux Folles, he was in the right play…”

No, she said, it was something else. When Stern’s sidekick, Robin Quivers, asked if Kelsey liked to dress like a woman, Grammer was less than demure.

“I’m not saying it…” Grammer said before laughing — though she seemed completely serious. Later, she implied that Kelsey wore her panties. Then, she seemed to faux-recant, afraid of a lawsuit.

I didn’t catch the show, but I can clearly hear Camille Grammer’s annoying voice in my head. And you just know she was rolling those bug-eyes of hers.

Man, she irks me so much I can hardly stand it. 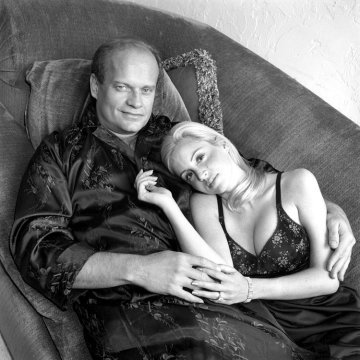