Home
Hollywood Gossip
Suze Orman Yells At Nadya Suleman, Tells Her We All Hate Her

If we start to see more and more of Nadya Suleman in the near future, we have Suze Orman to thank. The financial goddess met with Octomom on The Oprah Winfrey Show, and basically told her to be a media whore for pay.

The episode, which aired on Friday, focused on Nadya Suleman and all her horrible life mistakes – including, of course, the decision to have eight children at once. In an unexpected move, the mother of 14 finally admitted that she is addicted to having children, and perhaps she shouldn’t have had so many.

“I think I could’ve been self-medicating through children,” Suleman said. “Kids are safer. Kids won’t leave you. Kids will give me the unconditional acceptance and love that I didn’t feel I got from my mother.”

Suleman, aka Octomom, admitted that while she loves her kids, if she could go back in time, she would not have chosen to have the octuplets.

“If I knew then what I know now, I would not have said, ‘Doctor, one more,’” Suleman said.

Following the births of her first six children, Suleman said she wanted more. She realized there was a serious issue when after having her octuplets she still felt empty.

“I felt like a watering can with holes in it,” Suleman said. “In my delusional mind, the more I give to them, the more of me is leaking out. When it’s empty I go back. Doctor. One more [baby].”

So where did Suze Orman come in?

As you can imagine, having over a dozen children can be quite expensive, and Nadya Suleman is clearly struggling to stay afloat.

Orman urged Suleman, who has had a string of money and eviction-related issues, to get her financial life back in order pronto.

After Suleman admitted that she spends $2,000 on private school bills for her kids and doled out nearly $8,000 on toys for Christmas last year, Orman said enough was enough.

I couldn’t have said it better myself.

And what did Suze tell Nadya to do about the financial mess she’s in?

The money maven urged the megamom to continue to put herself and her children out in the media to make a living. She suggested Suleman seek agency representation and try to do things like write a book and secure her own show to generate an income.

After Suleman claimed that she was afraid to do more media because she “wants women to like [her]”, Orman screamed “Everybody already hates you!”…

While I’m pleased that Suze Orman verbally slapped Octomom, I’m a little annoyed that she told her to extend her fifteen minutes. Oh well, at least it will give me something to write about. 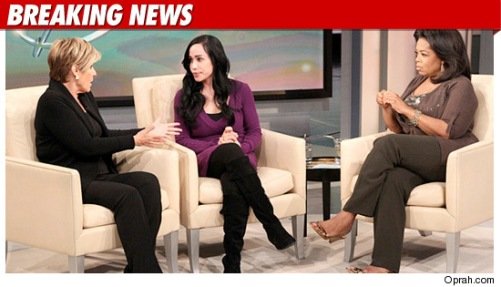