Didn’t I say just the other day something about Paris Hilton hiding under a rock lately? I should’ve kept my mouth shut. Sigh.

Paris is coming back to TV, folks. And this time she’s putting the ‘real’ in Reality TV. ‘Cause, you know, on her last reality show she was playing a character. Uh…riiight.

She said, “When I did The Simple Life, I was playing a character that I created and I had no idea it would last so many seasons. So I had to continue doing that character, so I think people assume that’s really how I am. But when they see this new show, they’re going to see the real me.”

She went on to reveal, “I had such a great time doing The Simple Life so it’s so much fun to still be doing it with The World According To Paris. It’s a show like I’ve never done before. I’m really letting cameras into my real life, and it’s just an all-access pass into what goes on.”

Joining Paris Hilton on her real adventures will be her boyfriend, Cy Waits.

If he’s not behind bars, that is.

Police say an officer stopped the SUV Waits was driving Aug. 27 after smelling marijuana smoke coming from the vehicle.

Waits is due for arraignment Feb. 17. His lawyer, David Chesnoff, said Waits is not guilty.

Of course he’s not.

Paris, by the way, is currently on probation after pleading guilty to misdemeanor cocaine possession and obstruction charges stemming from the same case. 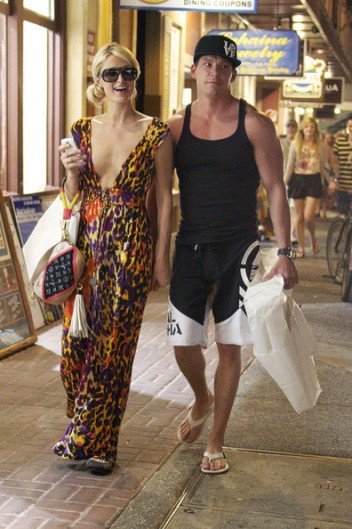