If you’re a fairly steady reader of Super Star Gossip, you know that I’ve been dipping my feet into the San Francisco Bay Area fashion scene, writing a few profile posts and attending a variety of fashion shows. Recently I was given the opportunity to write for an up-and-coming local fashion print and online publication called BAYFashion Magazine.

I profiled a very talented local designer by the name of Marti Miernik, who creates immaculate period pieces. Below is the article I wrote – the first of many I hope to write for BAYFashion Magazine.

Born in Poland, Marti’s first memory of fashion is standing in a living room; somewhere her seamstress mother took her to be fitted for new school clothes. There were two things her mother hated – buying off the rack and the school-provided uniforms. Marti couldn’t have been more than six when her mother talked the school principal into letting Marti wear uniforms her mother designed, as long as they were the school colors.

A passion for custom created clothing has stuck with Marti ever since.

Marti has had a great interest in history for as long as she can remember, and fell in love with the Renaissance Period at a young age. Upon coming to the United States, she looked for entertainment that catered to her passion for Europe and eventually became involved with the Renaissance Faire community.

Playing the role of Mary, Queen of Scots on the faire circuit, it was important to Marti that she looked the part and that her costumes were as authentic as possible. Often finding that most costumers she worked with did not embody the vision she saw for the Queen, Marti took matters into her own hands and created custom designs; pulling inspiration from books, paintings, and museums.

“…costuming is one of the key factors if you want to transport the patron to a different time period. And so, I create period fashions, bringing the best of what I’ve learned to life, teaching and sharing my passion for costuming and history with others.”

From couture wedding gowns to historically correct period pieces, Marti’s custom made creations are in a league of their own. Each piece is impeccable in their design and construction, with great attention to detail.

The fabrics come mostly from Los Angeles, with a few pieces imported from Florence and Venice. As for beads and pearls, Marti’s favorite spot is General Bead in San Francisco.

The meticulous beading – which Marti does all by hand, one bead at a time – takes the designs to the next level; each piece able to stand tall on its own, clearly above others in the sea of costume designing.

All the embroidery on each piece is researched extensively, and every inch of external stitching is done by hand, guaranteeing that each final product is historically accurate.

As for Marti’s choice in sewing machines, Yuki is her constant companion for sewing, while all the embroidery work is done on a Brother Duetta 4500.

“I love that machine. I seem to stun everyone when I mention that I do all my leather embroidery on it. Even the dealer was amazed when I showcased my work a time or two. I don’t think I could get half as much of my intricate work done without it.”

For almost two decades Marti has worked with Renaissance Productions, designing and producing some of the best themed events on the West Coast.

As if all of that wasn’t enough, Marti recently started a guild called The Needles Eye – a group for people with a deep love of period tailoring, who educate visitors at various events about the construction of period pieces.

While the majority of Marti’s clients are from the United States, she has been commissioned to create pieces for clients in Italy and Poland. As for any famous clients, she’s not talking except to say that while visiting Florence recently, she was commissioned to reconstruct a baroque gown for a “big” wedding. Sounds juicy!

You can find out more about Renaissance Productions at www.renaissanceproductions.com

Read the Ultra Hi-Resolution version the full magazine, as well as my article alongside gorgeous photos: BAYFashion Magazine February 2011 (on the left under ‘Latest Issues’)

P.S. You can download the issue to your iPad from the Magcloud Magazine Store for FREE!! 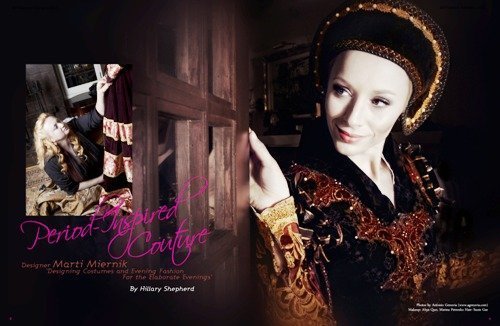