Warning: This article contains language that some people (with sticks up their butts) might find offensive.

Iconic comic George Carlin died yesterday of heart failure at the age of 71. Shooting to the front row of controversial comedy, George Carlin made his first mark on history with his “Seven Words You Can Never Say on Television.” In 1972 he performed his “Seven Dirty Words” routine at Summerfest in Milwaukee,Wisconsin, and was arrested for disturbing the peace. Then in 1973 he recorded “Filthy Words” which contained the seven dreaded words. After it was broadcast uncensored on the radio some guy called the FCC because he was unhappy that his son had heard the broadcast. Soon, FCC v. Pacifica Foundation made its way to the Supreme Court.

And are those horrible words? Ask, and you shall receive:

…daughter Kelly Carlin McCall had the following to say about her dad: “Most people know George Carlin as an icon of comedy and an advocate of free speech. I just know him as Dad … And what a dad he was. He taught me the value of speaking the truth in a world that doesn’t always want to hear it and gave me the gift of laughter. He was loved and revered by so many and will be missed beyond words — but never forgotten…

…His wife, Sally Wade, also spoke out about the loss of her “soul mate.” “George Carlin was and always will be the greatest love of my life. We had meeting of the minds, heart and spirit. It was a big love. He was my soul mate and always will be. Tomorrow is our tenth anniversary, and it was the best ten years of my life. It’s quite a shock right now, but I wish to express my sincere thanks and prayers to all who have reached out during this very difficult time. It is deeply appreciated.” George Carlin’s Daughter Talks About Her Dad

Politics according to George Carlin…

“Now, there’s one thing you might have noticed I don’t complain about: politicians,” he explained in a routine that challenged all the premises of today’s half-a-loaf reformers. “Everybody complains about politicians. Everybody says they suck. Well, where do people think these politicians come from? They don’t fall out of the sky. They don’t pass through a membrane from another reality. They come from American parents and American families, American homes, American schools, American churches, American businesses and American universities, and they are elected by American citizens. This is the best we can do folks. This is what we have to offer. It’s what our system produces: Garbage in, garbage out. If you have selfish, ignorant citizens, you’re going to get selfish, ignorant leaders. Term limits ain’t going to do any good; you’re just going to end up with a brand new bunch of selfish, ignorant Americans. So, maybe, maybe, maybe, it’s not the politicians who suck. Maybe something else sucks around here… like, the public. Yeah, the public sucks. There’s a nice campaign slogan for somebody: ‘The Public Sucks. F@@k Hope.'” George Carlin: American Radical

Ten days ago, on a rainy Friday evening, I had the extraordinary privilege of talking to George Carlin. As far as I know it was the last in-depth interview he gave before he passed away yesterday at age 71. Originally it was slated to run as a 350-word Q&A on the back page of Psychology Today. But I was so excited to talk to him—and he was so generous with his time—that I just kept on going. For question after question he indulged me, speaking thoughtfully about his childhood, his theories about humor, and his creative process. George Carlin’s Last Interview

In comedy, timing is everything…

Last week, it was announced that on November 10th the veteran comic whose infamous “Filthy Words” routine reached all the way to the U.S. Supreme Court would be the 11th person inducted into the John F Kennedy Center for the Performing Arts’ pantheon of humor and receive this year’s Mark Twain Prize for American Humor. (Past winners include Richard Pryor, Whoopi Goldberg, Lily Tomlin and Steve Martin.) R.I.P. George Carlin 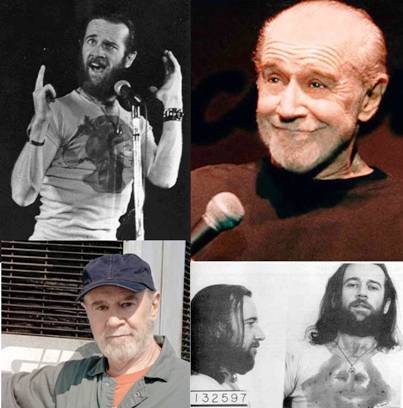