I smell a custody war!

It looks like things are going to get dirty between former UFC light heavyweight champion fighter Chuck Liddell and his ex Lori Geyer as they battle over their 12-year-old son.

It’s a fight of he said, she said at this point, with the next court appearance set for Tuesday.

Here’s what is known so far…..

On March 23rd Chuck Liddell picked up his son Cade from Lori Geyer’s house in Parker, Colorado, stating he wanted to spend some time in the area with Cade, and that he would bring the child back on March 27th.

On Friday March 25th Chuck Liddell was in a L.A. courthouse requesting full custody of Cade, saying the pre-teen no longer wanted to live with his mother in Colorado. Liddell claimed his son’s “health and safety are at risk” sighting a “severe toothache” Cade had been forced to live with for “2 to 3 months.” In addition, Liddell’s attorney alleged in court that the child was made to perform physical labor like snow removal to such a degree that it amounted to abuse.

That day the judge ruled that jurisdiction belonged to the Colorado courts, and a hearing was scheduled for Tuesday, April 5th. As he left the courthouse with fiancé Heidi Northcott, Liddell didn’t say much, other than stating he was trying to “protect” his son.

On March 27th, after Cade did not return to his mother’s home, Geyer’s current husband called police claiming Liddell had “kidnapped” his son. Also that day Lori Geyer claimed she got a call from Chuck Liddell’s attorney, saying Cade was in California with his father and that he wanted to remain there; he informed Geyer that her son would be staying where he was until a custody hearing.

According to Lori Geyer, Liddell has never shown much interest in his child, so she doesn’t understand why he is “now interested in custody.” 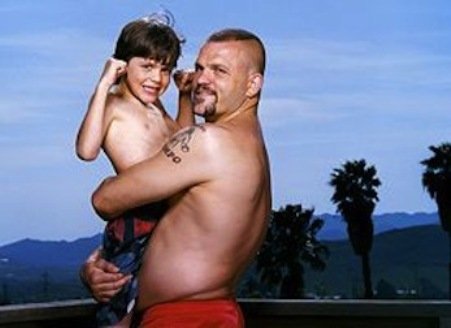