Um, yeah…..this is not going to end in happily ever after. Trust.

According to reports, newly divorced Scarlett Johansson and her rebound boyfriend Sean Penn – who has been divorced just a wee bit longer than Scarlett – are now living together.

After splitting from Ryan Reynolds at the end of 2010, Scarlett moved into a West Hollywood hotel room; and now, apparently, she has moved out – right into Penn’s $3.8-million home in Malibu.

So basically super-hot Scarlett Johansson broke up with her equally super-hot husband and moved into a hotel; then about two months later she hooked up with a rich dude in his 50s with smoker-face, and has now moved her sh*t into his house.

Wearing a very unflattering outfit, Scarlett was photographed with her old man near “their” home the other day while they were out jogging with Owen Wilson. The pictures of Scarlett in her stupid toe-shoes and overly-tight outfit resulted in ramped rumors that she’s preggers (see below).

Her rep quickly put the rumors to rest, telling PEOPLE that, “Scarlett is not pregnant. She’s been training for ‘The Avengers’ for over four months and is in the best shape of her life.”

Actually, if you think about it, this new living arrangement is a win-win situation. Scarlett Johansson has a really nice roof over her head once again, and Sean Penn has sweet, sweet twenty-something p**sy.

Charlie Sheen is clearly not the only man in Hollywood who is #winning. 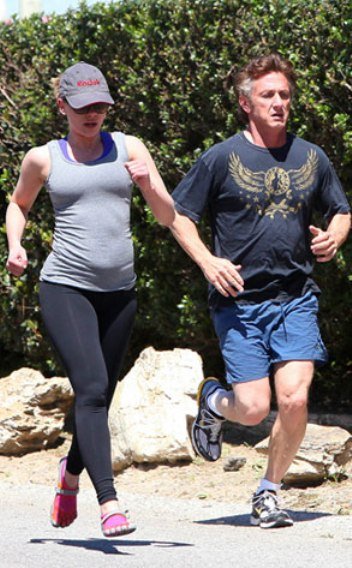