Need to catch up on the Casey Anthony Trial? I’ve got you covered!

Actually, a friend of mine has you covered since she’s the one doing the reporting. Check out her take on the juice below!

Side Note: My friend is a lay-person watching the trial and is in no way personally connected to the trial, nor can she be considered an expert. She’s merely stating her opinion.

In the State’s opening statements, the prosecution for the state of Florida theorized Casey Marie Anthony killed her daughter Caylee Marie Anthony with the use of duct tape. The defense for Casey Anthony countered by stating Caylee was never missing but rather died on June 16, 2008 from drowning in the family swimming pool, and that George Anthony, Casey’s father and Caylee’s grandfather, covered it up and disposed of the child’s body. Oh, and the defense also mentioned the meter reader who found the body six months later, Roy Kronk, also had custody of the body and buried it in the woods.

In the defense opening statements alone, I felt they didn’t know what the hell they were talking about since they have two people being responsible for disposing of Caylee’s body. First, Grandpa George took the body to dispose of it and then Mr. Kronk also had the body to dispose of it. My question is, “Who had the body to begin with?” George testified that he last saw Casey and Caylee around 1PM on June 15, 2008. So Casey was the last person seen with Caylee, and no one else.

For roughly the past two weeks, the State has presented their case by calling witnesses; Casey’s friends, ex-boyfriends, George and Cindy Anthony, Lee Anthony (Casey’s brother), police and forensic experts to bolster their case. It was exposed Casey’s numerous lies, since Casey claimed she had been looking for her daughter. None of her friends or boyfriends had a clue there was anything wrong in Casey’s life, because she went on about her life (partying, shopping and getting a tattoo).

Casey’s car smelled of human decomposition that even her friends were able to smell when she drove them around in it. Casey’s explanation was a squirrel was run over and died in the engine area of the car. However, prosecution witnesses (forensic and medical experts) claimed they found no animal residue anywhere on or in the car, and that human decomposition has an odor unlike anything else in the world.

George Anthony, Cindy Anthony, Simon Burch (the man who worked at the auto towing yard, where Casey’s car was impounded for about 3 weeks) all claimed it was an odor of a dead body. The police, who gathered evidence from the car and the car itself, have also claimed the smell of human decomposition was very prominent.

Videos of jail house visits Casey had with her brother, Lee, and parents, George and Cindy, showed her to be not at all in grief or remorseful for the death of her daughter. Instead, Casey was heard saying “everything” had been taken away from her, and she was a victim in this whole story. The videos showed her to be a liar, manipulative and self focused and absorbed. When she was told how much reward money had been offered for Caylee’s whereabouts, Casey’s response was “Jesus! That’s half my bond.”

The liner of the trunk in Casey’s care was brought into evidence. Hairs found in the car, as well as in the trunk of Casey’s car came into evidence as well. Experts again testified about “hair banding.” Hair from a corpse will eventually have a band close to the root (they showed examples of hair roots from a live body and a deceased one). It was pretty educational testimony, actually. Cadaver dogs made an alert to signify a dead body was present at one time. The dogs made their alerts in the backyard of the Anthony home, all around Caylee’s play house. That makes me think Casey had originally brought her daughter’s body there, prior to disposing of it in the woods. The cadaver dogs also alerted at the trunk of Casey’s car, which leads me to believe Caylee was in garbage plastic bag and a cloth tote bag in the car’s trunk.

Other evidence introduced to the jury was searches found on the laptop Casey used (which belonged to her mother) and the desktop computer in the Anthony home. Searches for “neck breaking,” “ruptured spleen,” “household weapons” and “chloroform.” The chloroform subject was hit on 84 different times.

The smell of human decomposition and chloroform where evidenced in the trunk of Casey’s car. That doesn’t mention the three pieces of duct tape found on the skull ditched into the woods. (Powerful circumstantial evidence, if you ask me.)

When Cindy Anthony took the stand, it was heart breaking as she heard her 911 calls to report Caylee missing. I think that’s when I (and many, I’m sure) began to have empathy for her and George. Mind you, it wasn’t the mother, Casey Anthony, who reported her child missing, but Caylee’s grandmother! Cindy cried, shook and broke down on the stand as she heard her 911 calls, then asked for a 5 minute break after listening to them. I feel it showed her to be a caring and grieving grandmother and mother, unlike the woman we saw early on who was in a state of denial and rather abrasive. The Anthony family may have been in denial early on, but I don’t believe they lied when they were under oath and on the witness stand to testify.

The prosecution has provided a step-by-step scenario for the evidence they have, so the jury understands their case. Forensic experts testified that a stain in the trunk of Casey’s car had the impression of a child in fetal position. (That right there really made me sad.) The remains found in the woods were found in a matter of several days, since the skeletal remains were dis-articulated, probably due to animal scavengers chewing on some of the bones. Garbage bags, a cloth laundry bag and remnants of Caylee’s clothing were also discovered near the skeleton. It’s likely that was where Casey kept the daughter she killed, stowed away in the trunk of her car.

At the time of this writing, it seems to me they the prosecution has well established a pretty good case to support their charges. They are:

The prosecution rested its case this past Wednesday. The defense was scheduled to begin presenting their case of defending Casey Anthony at 9AM EST Thursday.

It will be interesting to see what or how the defense will present its case to show Casey Anthony didn’t commit the murder of her own child. 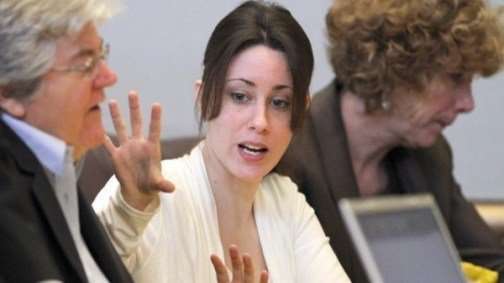