Don’t know about you, but I’m pretty darn excited about this week’s edition of Saturday Night Live on NBC.

Ok, so Lindsay Lohan wasn’t exactly “asked” to host, and more or less (more) called Lorne Michaels on the phone and begged to appear on the show as a way to remind the world that she’s an actual actress, and not just a junkie ex-child star with no real future or success outside of the slammer or a grave. I added that last part; her conversation with Micheals most likely ended at “actress.”

According to reports, LiLo is doing a wonderful job preparing for her hosting gig this week in New York. After arriving in the city on Monday, Lohan immediately went into her first full day of rehearsals. On Tuesday she rehearsed again for about three or four hours, which is typical for the guest host.

“Lindsay had been a little nervous about how the cast and crew would treat her. Lindsay arrived early for rehearsals on Tuesday, and was embraced warmly by everyone,” an insider tells RadarOnline.com. “Lindsay’s comedic timing is absolutely flawless. She is absolutely clear headed, and looks great.” [source]

Just showing up on time and doing well in rehearsals doesn’t automatically give Lindsay Lohan a redemption card, however. She really made a mess of herself over the past few years and it’s going to take more than kicking ass hosting SNL. Fortunately, it looks as though Lindsay understands this and is prepared for the road ahead.

During a recent interview with Matt Lauer on the Today Show, Lohan admitted that she stills needs to go through the process of proving herself, but that she is “clean and sober” and ready to move forward “in the right direction.” 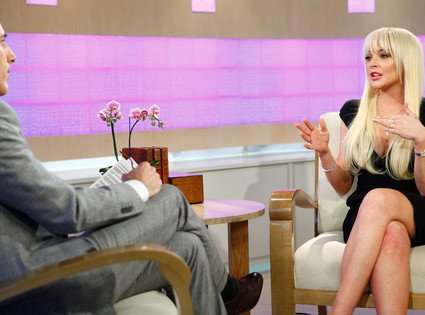 When asked if she was perhaps in denial the last time Lauer interviewed her, Lindsay actually copped to it.

“I don’t want people to have that reason to be scared anymore,” Lohan, who’s finally figured out what to do with her bangs, told Today’s Matt Lauer in an interview airing Thursday. “So being able to have this opportunity with SNL and the film, I’m gonna do what I’m supposed to do, and enjoy doing it, and do it as best as I can.”

…“It’s a scary thing to have to kind of express to people…I wasn’t as comfortable with myself then…I think it was a fear factor that I had about what was really going on. And, you know, I had to get that wakeup call.”