Sad news tonight…..actress Beatrice Arthur has died at the age of 86.

I know Bea Arthur as Dorothy Zbornak on NBC’s Golden Girls from 1985 to 1992, but older generations know her most as Maude, a spinoff of All in the Family.

Dan Watt, a spokesman for Arthur’s family, told the Associated Press that the star had been suffering with cancer, though he did not specify what kind. She died peacefully at her Los Angeles home with her family by her side, said Watt, who remembered Arthur as “a brilliant and witty woman.”

Maude, which debuted on CBS in 1972 (and ran until 1978) was a spin-off of the hit All in the Family. As the liberal cousin of archconservative Archie Bunker’s wife Edith, the much-married Maude wasn’t afraid to broach such controversial (especially for TV at the time) topics as abortion and civil rights.

Golden Girls, a popular NBC Saturday-night staple from 1985 to 1992, featured Arthur as the outspoken Dorothy Zbornak, who shared a Florida home with three other women, including her mother, played by Estelle Getty – who died last July, at 84. The other stars were Rue McClanahan and Betty White.

“Bea was such an important part of a very happy time in my life and I have dearly loved her for a very long time,” White said in a statement Saturday. “How lucky I was to know her.”

[Finish it at People.com] 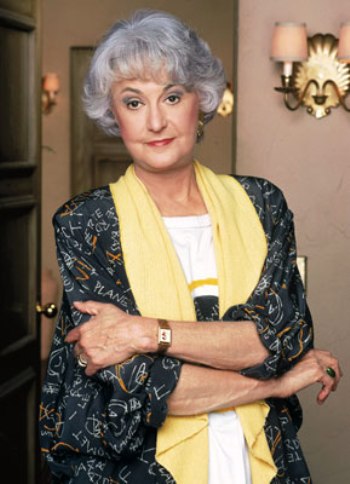