Nine Inch Nails frontman Trent Reznor and his girlfriend Mariqueen Maandig are getting married. Their engagement was announced over the weekend on the website for Mariqueen Maandig’s band West Indian Girl.

“In case [you] haven’t heard the news, Mariqueen got engaged,” the post reads. “Everyone in the West Indian Girl camp is super excited and happy for her. Q’s an awesome person, friend and bandmate, and she couldn’t be marrying a cooler guy. Talk about analog and digital love — their kids might all have Moogs for arms.”

The happy couple just went public with their relationship a few days ago, at the Star Trek movie premiere in Los Angeles.

In an interview with Rock Sound in 2005, Reznor talked about how his rock career and drug addiction had delayed marriage and kids for him. But now it appears he has now found time to include that in his life. “I had neglected [my love life], but I’ve been paying more attention to it,” he said. “It feels like I’m more equipped to function in that situation. I can actually be honest with myself and another human being.”

“What it had really been was an extension of that 23-year-old kid who said, ‘I want to stop everything in my life to do this,’ ” he told the magazine. “I didn’t want a girlfriend or marriage or a kid to get in the way of that opportunity. What that leads to eventually is one day saying, ‘Okay, I’ve sold this many records and played this big place. … I’m lonely.’ Then ‘Wow, I’m older than everyone else. How did that happen?’ Plus with drugs involved, time just flies off the calendar. So now I’m going to be an old dad instead of a young dad.”

So they’ve just come out as a couple? How long have they been together? I’m not up on the latest Trent Reznor news, and I have no idea who Mariqueen Maandig even is; never heard of her band either.

West Indian Girl is a rock band from Los Angeles.

The band’s name comes from a type of lysergic acid (LSD) that was popular in the early 60s. The initials are also a reference to James’ and Ten’s previous band, “WIG”. Their video for “What Are You Afraid Of” has received heavy airplay on MTV2’s underground show.

The band released their self-titled debut album in August 2004 on Astralwerks. 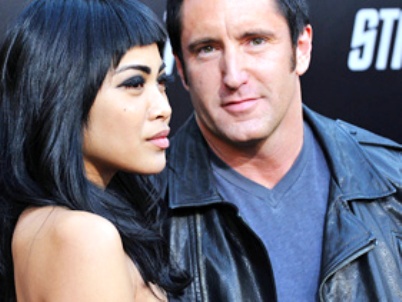