In other news, the sky is blue.

In the latest issue of Rolling Stone magazine, American Idol runner-up Adam Lambert finally admits what most of us have known all along – he’s gay.

“I don’t think it should be a surprise for anyone to hear that I’m gay,” Lambert says in the new issue of Rolling Stone, hitting newsstands this week.

The flamboyant Idol singer hits our cover and bares all, talking about his childhood (”I started to realize I wasn’t like every other boy,” he says), the drug-fueled Burning Man epiphany that led him to AI (”I realized that we all have our own power, and that whatever I wanted to do, I had to make happen,” he tells RS) and his run on the show (”I was like, ‘I’m going to glue rhinestones on my eyelids, @@@@@!’ “). And yes, he talks about his sexuality. “Right after the finale, I almost started talking about it to the reporters, but I thought, ‘I’m going to wait for Rolling Stone, that will be cooler,’ ” he tells us. “I didn’t want the Clay Aiken thing and the celebrity-magazine bull@@@@. I need to be able to explain myself in context.

“I’m proud of my sexuality,” Lambert adds. “I embrace it. It’s just another part of me.” Ultimately, however Lambert tells RS contributor Vanessa Grigoriadis that there are other parts of his life that he’s trying to keep front and center. “I’m trying to be a singer, not a civil rights leader,” he says.

It was that mission — and his Burning Man “psychedelic experience” — that lead him to Idol after years in musical theater. “I knew that it was my only shot to be taken seriously in the recording industry, because it’s fast and broad,” he tells RS.

My boyfriend and I have been together for five years, and for five years he’s been talking about going to Burning Man. He’s been before, but I never have. I can’t wait to tell him that Burning Man is what drove Adam Lambert to American Idol – he will be so proud. 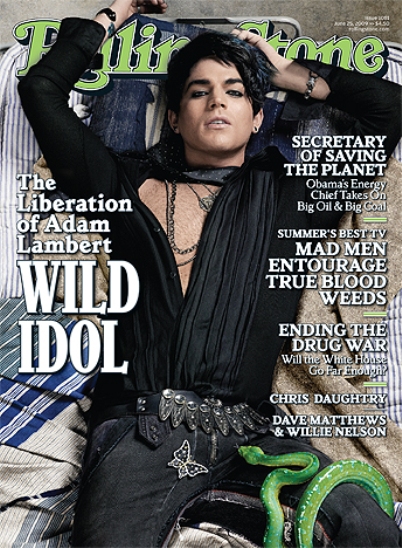