I received a text message about an hour ago that Billy Mays died, but I wasn’t able to confirm it until now.

Tampa Police report that at about 7:45 a.m. this morning Deborah Mays found her husband, 50-year-old Billy Mays, unresponsive at their home in Tampa, Florida.

The enthusiastic TV pitchman had just returned from Philadelphia where he was shooting a new commercial for OxiClean. The plane on which he had flown back to Florida experienced a blown front tire upon landing; when asked about it, Mays told a local TV station, “All of sudden as we hit you know it was just the hardest hit, all the things from the ceiling started dropping. It hit me on the head, but I got a hard head.”

Billy Mays returned home about 6:00 p.m. last night and by all accounts was feeling well and in good spirits. According to a source, Mays was “acting fine and normal…he was talking business with his father-in-law.”

The body has already been removed from the house, and police report that there were no signs of forced entry and foul play is not suspected.

An autopsy on Billy Mays is expected to be completed by tomorrow afternoon.

Although Billy lived a public life, we don’t anticipate making any public statements over the next couple of days. Our family asks that you respect our privacy during these difficult times.

Wow, there sure has been a lot of death in the entertainment world this past week.

<p>This sudden and odd death of Billy Mays reminds me of the way Natasha Richardson met her end.

I’ll update you if anything big happens. 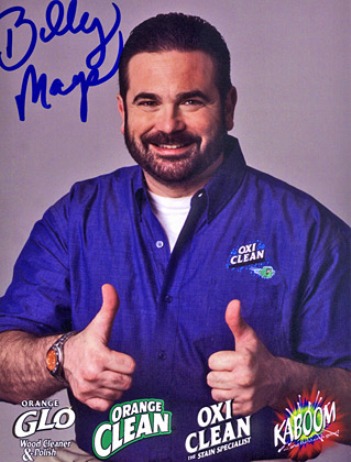