My step-dad told me when I was 14, “Just remember Hilary, all guys are assholes.” And you know what? He was right!

Now, now, before you get your panties in a bunch (unless you like that sort of thing, then by all means…) you must believe me when I say I knew even at 14 that he didn’t mean absolutely every man on Earth. It was more of a cautionary statement – an effort to prevent me from falling for all the crap young boys (and grown men) spew forth for the girls to cling to.

Let’s just say, it worked. Sure, I had some speed bumps along the way and have bought into a line or two, but for the most part I’ve been able to avoid a lot of the humdingers males fling at females.

Anywhoo, my point is…when men pull stupid selfish stunts and act like cavemen, it never surprises me, because they are after all “all assholes.”

And now we enter into evidence Exhibit C: Tiki Barber

Ex-football star Tiki Barber has left his 8-months-pregnant wife of over a decade, Ginny Barber, for some hot young blonde thing. I think that’s deplorable.

The football star-turned-“Today” show-correspondent left his wife of 11 years, Ginny, for the 23-year-old blonde, who also worked at 30 Rock, the sources said.

Ginny, who is expecting twins, found out about the relationship late last year, after the run-around running back moved out of their Upper East Side home.

… The affair is particularly stunning in light of Barber’s long-standing disdain for his philandering father.

“I don’t give a [bleep] that the relationship didn’t work,” he said of his parents’ split in a 2004 Post interview. “Not only did he abandon her, I felt like he abandoned us for a lot of our lives. I have a hard time forgiving that.”

Pa-cha! Whatever. Tiki’s being just as selfish as his dad was all those years ago. And if nothing else, it’s just tacky.

“After 11 years of marriage, Ginny and I have decided to separate,” Barber said. “This decision was a painful one, but we are moving forward amicably and will continue to work together to raise our children with the love and dedication they have always known.”

Tiki and Ginny began dating 16 years ago when both were students at the University of Virginia.

Barber, who turns 35 today, was hired by NBC just after he retired in 2007 — when sources say he first met Johnson, who was working there as an intern.

In his 2007 memoir, “Tiki: My Life in the Game and Beyond,” Barber described the example he wanted to set for his kids.

“I want to be an honorable man, because that’s what I want them both to be,” he wrote, noting, “My family is everything to me.”

Remind me again what’s so honorable about a man leaving his pregnant wife for a woman he hardly knows. 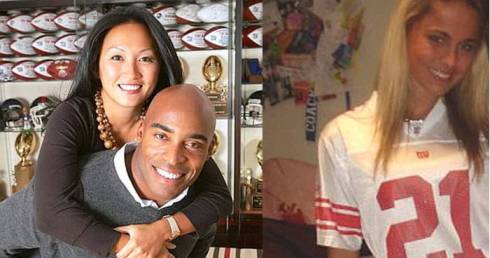