Having trained in dance and theater in high school, Charleston Pierce began his career in fashion and entertainment in the early 1980s, as a student at the San Francisco School of the Arts.

With his strong background and clear confidence, Charleston was ripe for the picking when discovered by Larry Hashbarger, and then signed with Jimmy Grimme’s modeling agency in San Francisco. He later signed with Stars Model Management, and is represented by them to this day.

Charleston Pierce has worked consistently since the beginning of his modeling and acting career – which is no small feat in the ever-evolving world of fashion and entertainment.

So how did the successful and busy Charleston Pierce get involved in the Fashion Fight AIDS Fashion Show?

I first heard about the event from one of its producers, Leyina Chen, who sent me an email through Facebook explaining the fundraiser event for AIDS awareness. For the last 29 years, Macy’s Passport has been giving back to the community in AIDS research helping to fight the disease. I’ve been doing the show for the past 25 years to support the cause as well, so it was an easy decision for me to feel compelled to help out and to volunteer my services to the local designers and fundraiser to help raise money.

AIDS is a disease that affects our family and friends. We can inspire people to be aware that everybody matters, and everybody’s voice matters when saving lives. It’s not about race or color – it’s about helping other humans. It is not necessary for people to give money in order to contribute to this event; you can volunteer your services whether it’s production, media, backstage, etc.

Fashion is only a vehicle used to inspire others to get in involved – to care for someone, for another fellow human being. We can connect and come together for the same cause, and at the same time give local designers an opportunity to show their designs, and for models to strut their stuff. It’s a win-win situation. Everyone is contributing to a good cause, and it brings the San Francisco Bay Area together. It brings the world together. 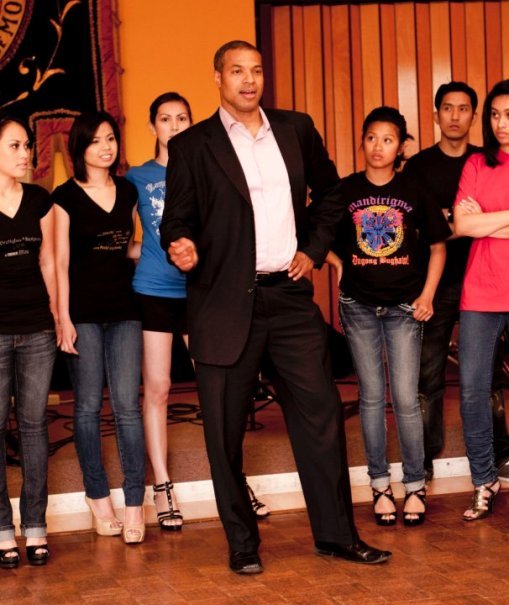 A celebrity among the Bay Area’s top fashion shows, Charleston is most well known for his vibrant presence on the runway; especially at the Macy’s Passport annual fashion shows where he has appeared as a model for 16 seasons. That’s huge!

From 2004 to 2009 Charleston Pierce served as runway trainer and model coach for Macy’s Passport, and from 2007 to 2010 was the San Francisco Junior League Fashion Show Model Trainer. Just this past May Charleston joined the Plus Academy Bay Area and taught a 4-week class on the basics of the runway.

Check out Charleston’s website for information about the model workshop and Runway Bootcamp that he started this year: