Did you miss me? Oh yes you did, don’t lie. I missed you too. But I’m back now so stop crying. Seriously, stop crying. It’s not pretty.

Burning Man 2010 was probably one of the best experiences of my life thus far. And one of the worst.

When I look back on my time in the Black Rock Desert at Burning Man 2010, there are a few things that will be in the forefront of all my memories – a million lights, blisters, colors, and bruises. Oh, and sand; lots and lots of sand.

I’m not even really sure where to start. It’s not an easy thing to describe a place such as Black Rock City – a place erected in the middle of a dry lake bed (the playa) every year for eight days – that draws people from all corners of the earth, and gives them a world in which to be their ultra-creative selves and thrive in togetherness, art, and love.

Burning Man is truly something you have to experience for yourself to fully understand its meaning and power.

‘What is Burning Man?’ 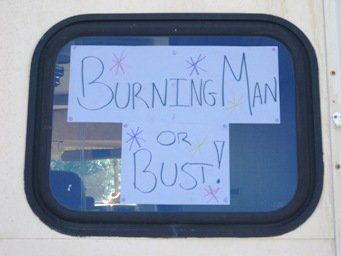 We hit the road about 5:15am on Monday and traveled North East to an area in Nevada beyond Empire, and just past a teeny-tiny town called Gerlach. It wasn’t until Empire that we felt like we weren’t the only ones going our way. 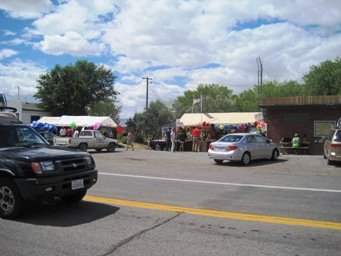 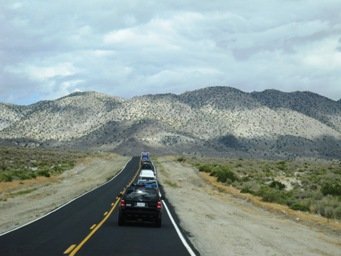 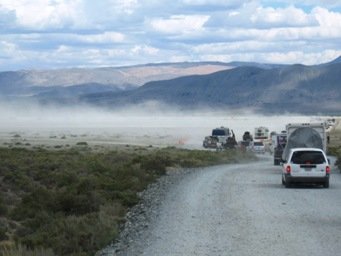 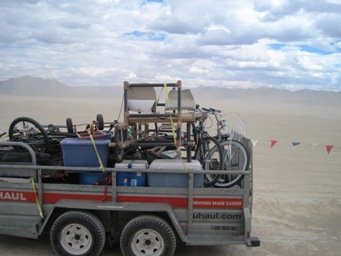 When we finally reached the beginning of the playa, we could only half breathe a sigh of relief, as we had another three hours to wait before handing over our tickets to a greeter and setting up our camp.

As we waited in one of the many lines with the many, many other cars, the wind was doing it’s best to blow as much dust into our RV as it possibly could. This wouldn’t have been a bad thing if we could close our windows, but seeing how it was over 90 degrees outside and our RV doesn’t really have an air conditioner, that wasn’t really a viable option. So we suffered. And inhaled the first of many tons of playa dust. 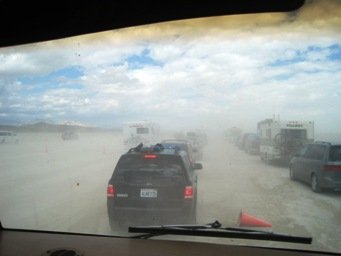 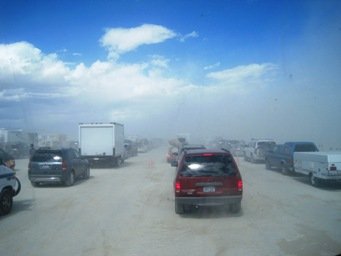 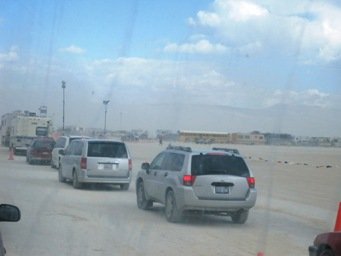 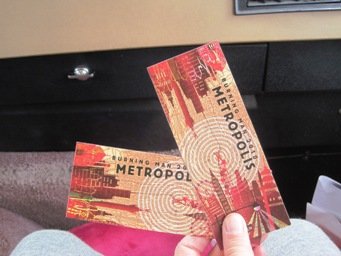 But then a wonderful thing happened – it began to rain. Not so much that the dirt turned to muck, but just enough for the dust to settle; making perfect conditions in which to set up camp. While we did so we were visited by a guy with red-orange hair who asked if he could leave his bike by our RV because he was riding it in the rain and it was now too muddy to continue. We chatted for a bit about this and that, and then all noticed something beautiful. 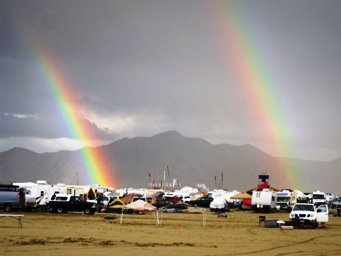 Yes folks, a double rainbow; one of the most vivid I have ever seen. After taking a moment to mock that dude on YouTube it dawned on me that this was actually a good omen; perhaps a sign of what was yet to come.

If only I knew.

As day settled into dusk we strapped on our sandals and took our first walk around town. After several hours, what seemed liked a zillion miles, and two “bar camps” with drinks, we returned to our RV for the night.

It became clear shortly thereafter that we had brought a couple of things back with us – namely blisters. Oh joy. Nothing like getting three blisters on the first day. Was it the sandals? The hard ground? Sweaty feet? Or perhaps a combo of all three. All I know is that we hadn’t even been there 24 hours yet and my feet were already killing me.

We decided the next day our mode of transportation would be our bikes.

Now, this may sound like small potatoes to you, but until that day I literally had not ridden a bike in 20 years. Do you know how much your balance changes in 20 years?? Yeah, it wasn’t exactly something I was looking forward to. Although, I was interested in finding out if it’s true that you never forget how to ride a bicycle.

After a short pep-talk with myself, I straddled the bike and took off on a quick ride around the RV. Much to my pleasure I was able to ride as if I had been doing it for years.

Figuring we were good to go, we loaded up our camel packs and went on a little jaunt. 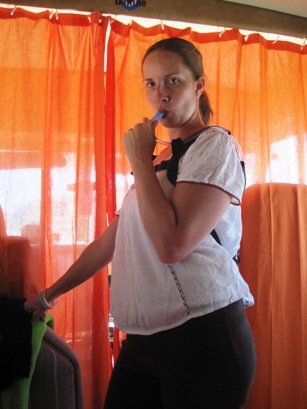 I can honestly say that I have never in my life seen anything quite like Black Rock City. There were people and bikes everywhere. And I mean everywhere. And the art! Oh man, the art!! It’s friggin’ insane. It completely blows my mind that absolutely everything on the playa is not only created by hand, but somehow hauled in and reassembled; and all just for a single week of enjoyment! 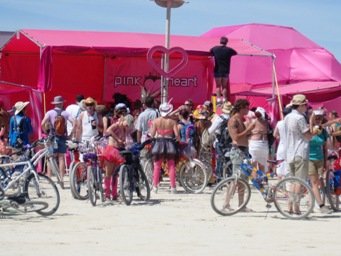 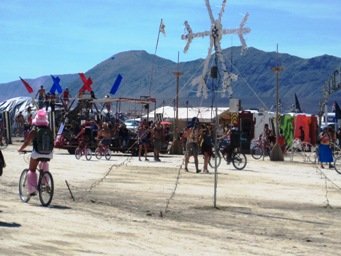 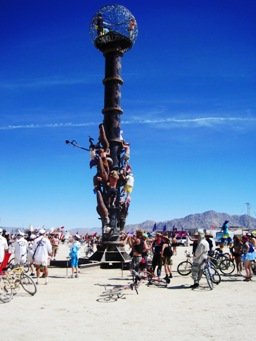 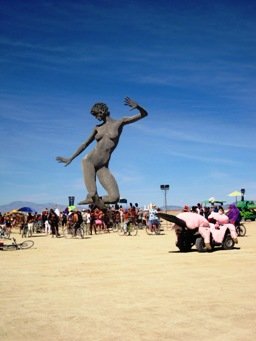 Apparently I was in so much awe of the beauty around me, that I totally forgot to take pictures of everything I was seeing. I wish I had a camera attached to my forehead for such moments.

Some of the most awe-inspiring pieces of art are the vehicles that roam the playa at all hours of the day and night. Once cars, trucks, and even boats, these rolling masterpieces cover everything from mobile tiki bars, to wedges of cheese, to gigantically huge party yachts on wheels. Literally. There were actually yachts on wheels riding across the desert. It was beyond surreal. Almost like a fleet of ghost ships. Ghost ships with half naked passengers.

And of course, there’s The Man – the centerpiece of Black Rock City (and a life saver in the middle of a sand storm, but we’ll talk about that later). 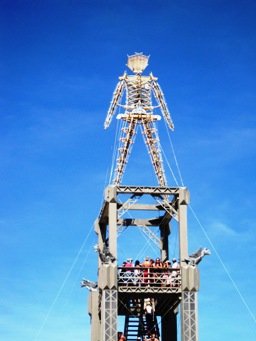 After several hours out we rode back to camp for a bite to eat, and you know what I discovered as we did?

My butt hurt like it had never hurt before in all my 32 years of existence. I’ve fallen enough times to know what that pain feels like, and trust me, this was like nothing else.

The ground went from really hard and bumpy to soft sand you had to peddle like crazy to get through. With every bump I felt like I was being bashed in the crotch with an aluminum baseball bat. So. Not. Enjoyable. Seriously. In fact, I’m still sore and wince every time I sit down.

All that being said, however, my introduction to Burning Man was successful, and one I will always remember. 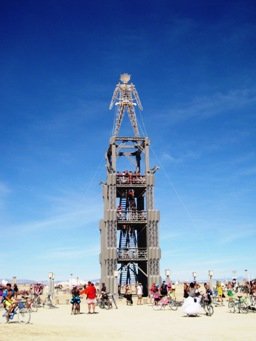