Once upon a time there was an aging actress and her still-good-looking but not-really-working husband who set out to find their path back into the spotlight.

They started out pretty subtlety, with the actress posting pictures of herself in a bikini on Twitter; along with saying things during interviews that some may think was controversial.

All the while a reality show as in works.

Lisa Rinna and longtime husband Harry Hamlin appeared on NBC’s Today this morning to discuss their new reality TV show, as well as a couple of books they have coming out. Everything was going swimmingly until Harry received a call on his cell phone. Why he didn’t turn it off during the interview, I don’t know.

Good thing he did answer, though, because it was someone calling to tell him that the couple’s boutique in Sherman Oaks had just been burglarized.

Hamlin informed Kathy Lee Gifford and Hoda Kotb that no one had been injured … but he clearly wasn’t happy with his alarm company.

… The alarm company — ADT Security Services — has responded to Hamlin’s criticism of their work … claiming operators took “appropriate action” after the incident and had notified cops within 2 minutes of the break-in.

ADT also claims they have a guard service available — but Hamlin and Rinna don’t pay for that level of protection.

Watch the video HERE at TMZ

Oh yeah, and Lisa Rinna FINALLY decided to do something about that awful trout mouth of hers.

For the first time since having her lips plumped up with collagen injections in 1986, Rinna had the size of her upper lip surgically-reduced. The budding reality star has confessed that she had her infamous trout pout cut down to size in a secret surgery on Aug. 26. [source] 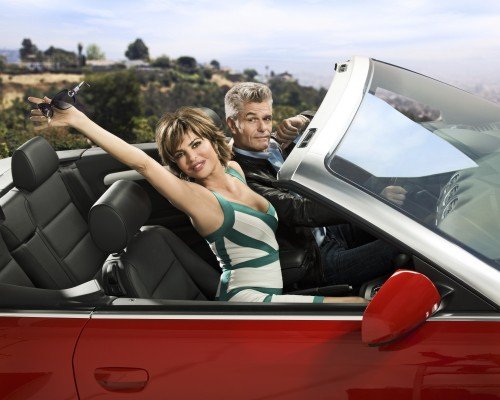