About a week and a half ago, I showed you a picture of NBC’s new Wonder Woman and shared my distaste for it.

Check Out The New Wonder Woman. Now Excuse Me While I Gag.

Apparently, I was not the only person who found oh-so-many things wrong with the outfit, because it looks a bit different now.

Instead of the skin tight blue shiny leggings and annoying blue hooker boots, Adrianne Palicki is now wearing darker pants that look like they could be denim, and her boots have been changed to red.

The melon boobs and upside down headband remain, however. 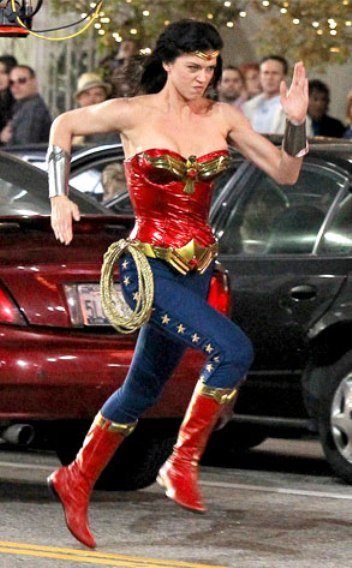 While Adrianne’s revamped Wonder Woman costume is indeed an improvement from the first one we saw, I don’t think it’s enough to change the way I feel about the retooling of such an iconic TV show. For the record, I’m against pretty much all remakes of super-iconic shows and movies.

Side Note: In my last post about Adrianne Palicki’s Wonder Woman costume, I said that I had never heard of her. That’s not totally accurate. While I don’t recognize her name, per say, I have come to realize that I do in fact know who she is…..she played Tyra Collette on NBC’s drama Friday Night Lights.

Check out Adrianne Palicki in action as Wonder Woman…..