While it’s nice when once hell-raising friends who had a stupid falling out reunite years later to bury the hatchet and hit the town once again, I think we should take the recent reunion of Lindsay Lohan and Paris Hilton with a grain of salt.

I mean, it is Hollywood; where nothing is really real.

And what better way to stay relevant in the media than playing nice and being seen with someone just as desperate as you are?

After a falling-out in 2006, when Lohan hooked up with Hilton’s ex-beau Stavros Niarchos, “they’ve put their past behind them and have bonded over all the stuff they have in common,” an insider tells Us Weekly. “They both feel screwed over by Hollywood and their older friends.”

So what exactly do Paris Hilton and Lindsay Lohan have in common? I mean, besides making horrible decisions only to be non-punished due to their Teflon court wardrobe, having crappy fair-weather friends, and watching their star fade? Just curious.

But don’t expect Lohan, 25 –who was photographed leaving Hilton’s Malibu home at 5 a.m. July 31 — to order matching necklaces for her and heiress, 30, just yet.

“Secretly I think they’re only hanging out because they know it makes a better picture,” adds the source. “They want to be superfamous again!”

And Lindsay Lohan fell down, which she later blamed on the paparazzi. Of.Course. 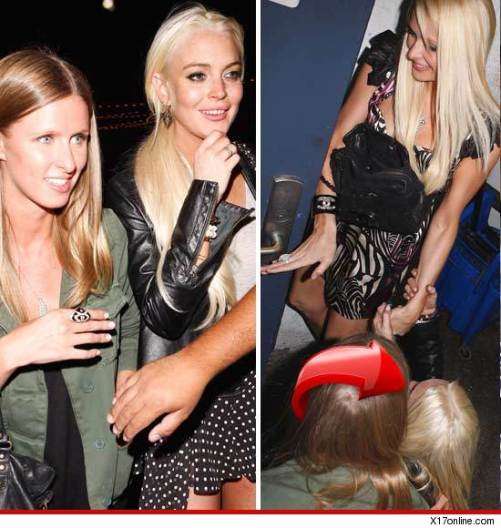