I’m not sure if you’re aware of this, but Liberace was gay. Yeah, shocking; I know.

In today’s world of open sexuality and flamboyance in music, artists don’t necessarily have to stay in the closet and live a life that is not authentic to who they really are. But in the mid-20th century it was a very different story.

While he lived a public life as a talented and successful pianist, Liberace privately held a lot of secrets and the pain of having to hide his personal life from the world.

And now they’re making a movie about it!

From movie producer Jerry Weintraub comes Behind the Candelabra; directed by Steven Soderbergh, and starring Michael Douglas as the one-and-only Liberace, with Matt Damon playing opposite Douglas as Liberace’s longtime partner Scott Thorson.

It is Scott’s autobiography that inspired the HBO made-for-TV movie, by the way. Production starts in mid-2012.

“[Liberace] was Elton John and Lady Gaga before they even dreamed of it. But he had two sides to his life — the dark side, which he couldn’t talk about in those days because coming out of the closet could kill a career, and then he was this bigger-than-life artist onstage. He was living in two polar-opposite worlds. And I wanted to show that dynamic.” 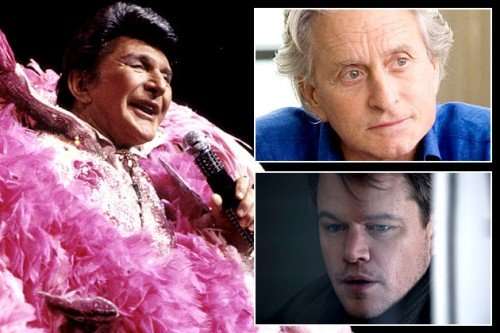