Home
Hollywood Gossip
A Few Questions For Author Brandie Knight. And Her Answers.

Hey ya’ll, have you entered my Brandie Knight Hollywood Under The Covers contest yet? Because you really should.

Without spoiling the surprise, I can tell you that Hollywood Under the Covers is like no other book you have ever read before. And Brandie Knight is like no other lady you’ve ever met before.

Q: How did you get started in the business?

A: Twenty years ago, I worked at a 20,000 seat outdoor amphitheater at Lake Compounce Festival Park in Bristol, CT., and it was my first taste of the insane entertainment industry. I was exposed to the unique lifestyles of the world’s most famous bands and the unbelievable behind the scenes shenanigans. I was there during the MTV tour when Milli Vanilli was caught lip syncing in the act and Guns n’ Roses refused to play to a sold out venue.

Q: What was the single most important choice/move you made that really got your foot in the door for the first time?

A: The most important choice I made that really got my foot in the door for the first time was when I met the legendary comedian/actor/producer Tommy Chong of Cheech & Chong. I interviewed him for my entertainment magazine, Party Chasers, at a comedy club in Oklahoma City, OK., and realized that his wife, Shelby, handled the business end of things for his career. After the interview, I turned my focus to Shelby and we hit it off. A week later, she called me to come to work for them. I eventually relocated to Los Angeles, CA. For over ten years, I worked as Chong’s personal publicist and road manager. By working for the legend, many doors opened for me in the entertainment industry where I was able to create and produce my own projects.

A: If I had it to do all over again, I would try not to be so open and honest when dealing with people in Hollywood. It is a cut throat, greedy business where people are very self-centered and motivated by large amounts of money. If you prematurely expose too much information, it can come back to bite you in a negative way. The one thing that I would do the same is not to go “Hollywood” to remain a down-to-earth person and stay true to myself. It is very easy to get sucked into the dark side of Hollywood because temptation is everywhere.

Today we are starting the month with a book contest. Our guest author is Brandie Knight, author of Hollywood Under the Covers and she will be visiting today and tomorrow. We will be giving away a copy of her book at the end of her stay.

To become eligible to win, all you have to do is ask a question or leave a comment on both days. One lucky reader who comments with their email address is put in a pot to win the book. However, they must sign up for email updates prior to the author’s appearance.
To recap:

UPDATE: Hollywood Under The Covers By Brandie Knight – A Review 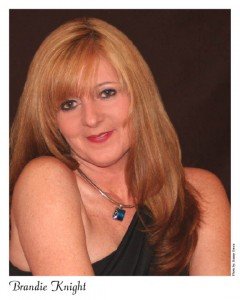 After twenty years in the entertainment industry, Brandie Knight is writing about her encounters in a fictional environment in Hollywood Under the Covers. Over the years, Knight has created and produced a television pilot, two radio shows, and an entertainment magazine. She is the co-producer of the award-winning documentary a/k/a Tommy Chong, and a former entertainment publicist. Knight splits her time between Las Vegas, NV, Taos, NM, and her hometown of Ponca City, OK. Visit her sites at www.brandieknight.com, www.facebook.com/brandie.knight, and http://twitter.com/brandieknight1